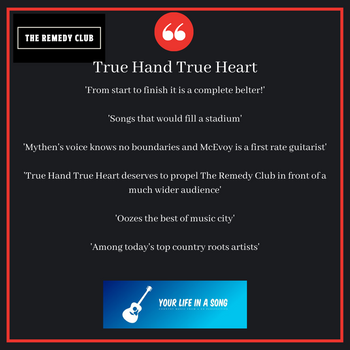 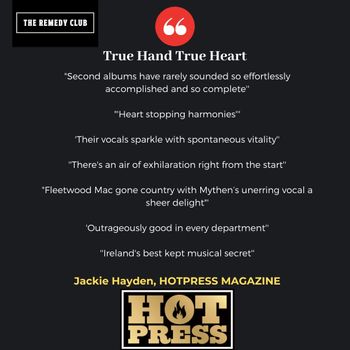 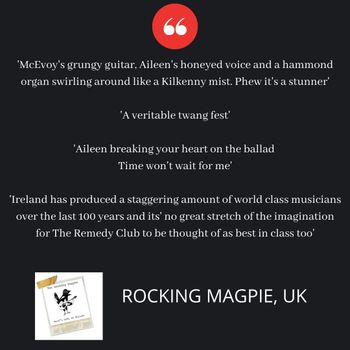 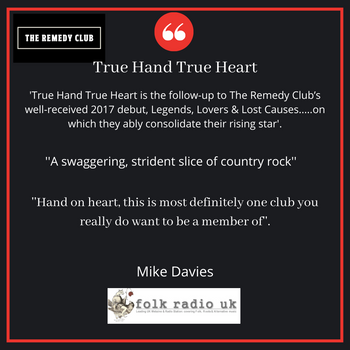 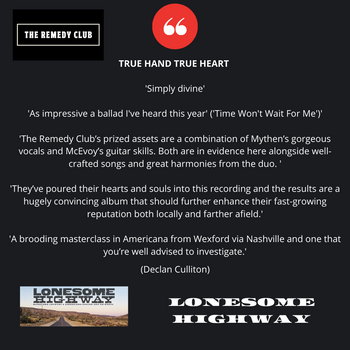 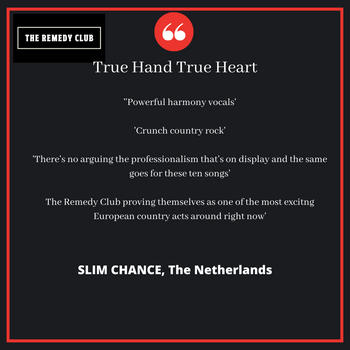 "Second albums have rarely sounded so effortlessly accomplished and so complete"

''Their vocals sparkle with spontaneous vitality''

''There's an air of exhilaration right from the start''

''Outrageously good in every department''

''This is one album you could survive a lockdown with''

'Ireland has produced a staggering amount of world famous and world class musicians over the last 100 years or so; and it's no great stretch for The Remedy Club to be thought of Best in class too.'

YOUR LIFE IN A SONG, UK

'From start to finish it is a complete belter!'

'Songs that would fill a stadium'

'Oozes the best of music city'

'True Hand True Heart is the follow up to The Remedy Club's well received 2017 album Lovers, Legends and Lost Causes on which they ably consolidate their rising star.'

'The Remedy Club’s prized assets are a combination of Mythen’s gorgeous vocals and McEvoy’s guitar skills. Both are in evidence here alongside well-crafted songs and great harmonies from the duo. '

'They’ve poured their hearts and souls into this recording and the results are a hugely convincing album that should further enhance their fast-growing reputation both locally and farther afield.'

'A brooding masterclass in Americana from Wexford via Nashville and one that you’re well advised to investigate.'

'A rocking firecracker of an album'

'A very good record from a duo that have a supreme amount of talent.

FATEA MAGAZINE (UK)  - ''A classic, rich and wholly authentic country-roots sound, with vocals to die for.''

‘That’s the beauty of these two; they stamp their own mark to create something brand new.’  ‘A lot of country music adheres to a strict formula. The Remedy Club most certainly do not. Instead, in Lovers, Legends & Lost Causes they have made an album of refreshing originality which let’s hope brings them a lot of new fans.’

THE ROCKING MAGPIE (UK)  - 'My new favourite duo of all time.'  'The spirit of George & Hank in every note'.  'Damn pure brilliant!'.  'Clever and articulate songwriting'. 'Some of the dirtiest twang guitar you'll ever hear'. 'Damn fine country music but with an Irish heart and soul'.

COUNTRY PEOPLE MAGAZINE (UK)  - 'I Miss You' has a spirit and urgency.  The harmonies are excellent, the guitar break is terrific and there is a touch of Irish as well as Americana about it.  Top marks.'

FOLKING.COM (UK)  - 'There are titles like ‘Get Away with It’ and ‘Bottom of the Hill’, where McEvoy masterfully manages to convey frustration and disappointment alongside lyrical images that boast a dark quirk'.

'The conscious idea of Lovers, Legends & Lost Causes make it a concept album of sorts, but without the ‘concept’ being rammed down the listener’s throat and while it boasts the familiar blueprints of a country record it’s not predictable or cliché, but rather, a good example of The Remedy Club’s talent for writing and performing good, solid Americana'.

'She has one of those butter-wouldn’t-melt, innocent voices that belies an ancient soul, kind of a cross between Shirley Temple and Etta James, soothing and disturbing at the same time'.

'KJ McEvoy is a classy guitarist, nimble and poised, never needing to break into a sweat'.

'There is an instinct at work here. Right from the gorgeous harmonies that are all over “I Miss You” it is clear that these 11 songs are special'.

'The class, the skill and the incredible ability to write wonderful country-flavoured, rootsy Americana continues unharmed as The Remedy Club'.

'Mythen possesses a voice that can convey emotion like few others'.

'“Lovers, Legends And Lost Causes”, with its Intelligent wordplay and ability to skilfully nip off down whatever tangent it chooses the record is a stark reminder that albums can still be both an ear for classicism yet still very much be of in its time''.

''Love their wordplay and tribute to Tom Waits on ‘Tom Waits Up’ and the guitar playing on ‘Get Away With It’. Both have distinctive vocals and take the leads or harmonies on each song as required. ‘Listen’ To Hank Williams’ is another stand out, taking the classic Hank Williams sound and yodel, adding in their own tribute. Impressive to say the least.

''Country with that classic sound and a clear, modern production. The Remedy Club should be destined for big things in the country genre''.

''Most impressive album that ticks so many boxes''.  ''Gorgeous harmonies & aching pedal steel''.

''Further evidence that Americana is very much alive and kicking locally and not confined to artists across the pond''.